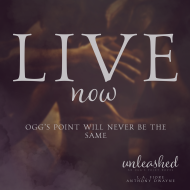 ♥ ♥ ♥ The quaint town of Ogg’s Point rests on the rocky coasts of Maine. Native Rutledge Raines left home with no plans of returning, but years later he is drawn back to sell his late grandmother’s house. He never imagined the mundane task would drop the annoying but sexy Peyton Morgan into his life. Being […]